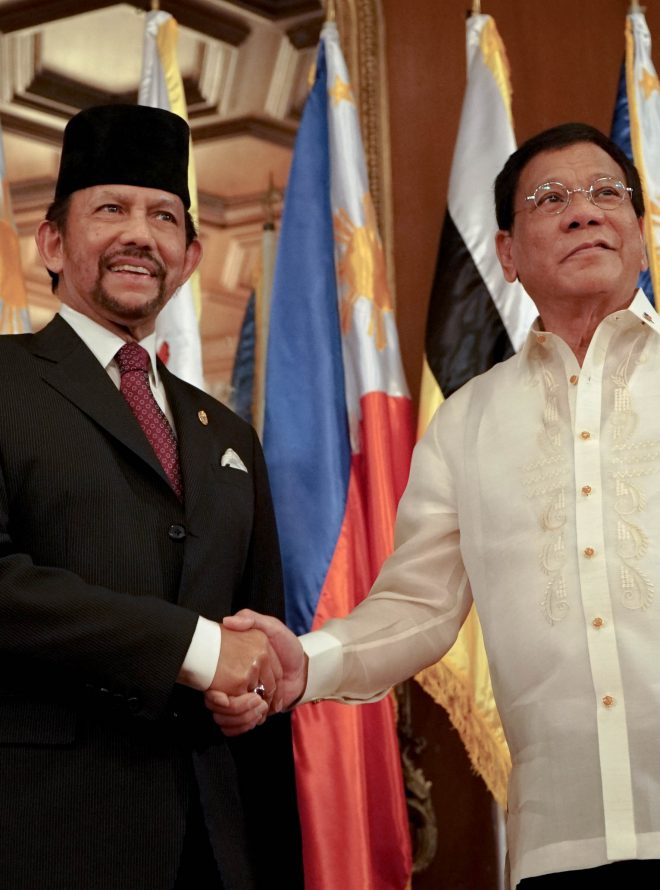 The Philippines and Brunei have signed two agreements that will bring the two countries "even more closely," President Rodrigo Duterte said on Thursday. Duterte and visiting Brunei Darussalam Sultan Hassanal Bolkiah witnessed in Malacanang the inking of the agreement on cultural cooperation and the memorandum of understanding on halal industry and halal export development and promotion. Duterte, in the joint press statement, hailed the signing of the two agreements, saying "these are positive steps in the right direction." "They provide the framework for us to work even more closely," he said. Bolkiah, who is on a state visit here and will attend the 30th Association of Southeast Asian Nations Summit on April 29, said the signing of agreement on cultural cooperation would "instill greater understanding particularly among our young generation on the customs and heritage that brings us together." The Brunei leader said his country looks forward to future collaboration in addressing issues on drugs. "We believe that both sides will benefit from the exchanges of expertise and best practices in this area," he said. The Duterte administration has been waging war against illegal drugs. Bolkiah also reiterated his government's participation in the International Monitoring Team in southern Philippines as Duterte recognized Brunei's role in the peace process. With the support of Bolkiah and other Southeast Asian leaders, Duterte, chairman of the ASEAN this year, said the Philippines would work with them to ensure the "principled position for the peaceful resolution of disputes will be articulated fully." "This is a collective interest that must be upheld in the implementation of the Declaration of the Code of Conduct and greater progress on the Framework of Code of Conduct in South China Sea. As we seek peace, stability and security in the vital waters of South China Sea, we must remember that we have duties as responsible members of the international community which we must abide," he added. The Philippines and Brunei are two of the four ASEAN member countries, which have claim in the South China Sea. The other two Southeast Asian countries are Malaysia and Vietnam. China and Taiwan have also been claiming the disputed waters. (Celerina Monte/DMS)