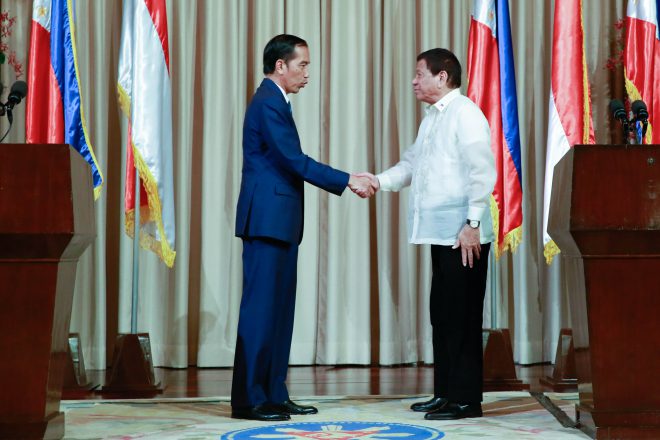 The Philippines and Indonesia forged on Friday agreements in the fields of agriculture and transportation. President Rodrigo Duterte and visiting Indonesian President Joko Widodo witnessed the signing of the memorandum of understanding (MOU) on agriculture and the joint declaration on the establishment of sea connectivity between Davao-General Santos Southern Mindanao and Bitung North Sulawesi. In his bilateral meeting with Widodo, Duterte, in a joint statement, said they "reaffirmed the importance of peaceful resolution of disputes and the supremacy of law and the primacy of rules in the behavior of responsible states." The Philippines, along with three ASEAN member states, such as Brunei, Malaysia and Vietnam, has been engaged in a territorial row with China. Widodo said he and Duterte have agreed to elevate cooperation of the two countries in the areas of politics and security, economy, maritime, and people-to-people contact. According to Presidential Spokesperson Ernesto Abella, Duterte did not discuss with Widodo during the expanded bilateral meeting the case of Filipino female death row convict Mary Jane Veloso. "It will be pre-emptive to say as well if it was discussed during their private meeting (four eyes)," Abella said in a statement. Before his meeting with Widodo, Duterte said he might bring up Veloso's case. But Duterte said: "I will honor what the laws are in their country. We will not imposes. We will not demand." Veloso was convicted in Indonesia for drug trafficking. She was supposed to be executed in 2015, but through the intervention of the previous administration, her execution was suspended after another Filipino who allegedly duped her in bringing the illegal drugs surrendered to the Philippine authorities. In combating transnational crimes, the Indonesian leader said he and Duterte also agreed to conduct a joint working group on counter-terrorism this year expanding the 2014 MOU on Counter-Terrorism Cooperation and strengthen intelligence information cooperation. "We recognized the need to address both traditional and emerging threats and expressed readiness to step up cooperation against terrorism, violent extremism, piracy at sea and transnational crimes, including the trade of illicit drugs," Duterte said. He also said they also agreed to use bilateral mechanisms and trilateral arrangements to help secure vital waters that connect the two countries. The Philippine president also thanked Widodo for Indonesia's sustained support for the peace process in southern Philippines. Widodo is in Manila for a state visit, and to attend the 30th ASEAN Summit on Saturday and the launch of the ferry service route between the two countries on Sunday. (Celerina Monte/DMS)