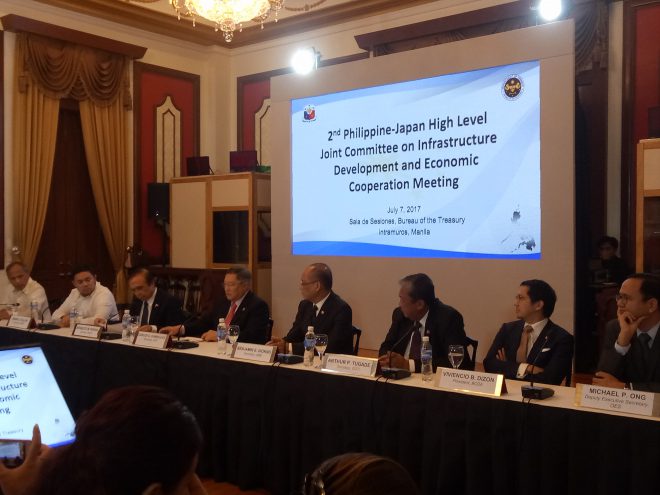 The ​Philippines and Japan are finalizing flagship cooperation projects worth at least P315 billion to be funded by Japan, Finance Secretary Carlos Dominguez III said Friday. Dominguez announced this in a press conference after the second Philippine-Japan High Level Joint Committee and Infrastructure Development and Economic Cooperation Meeting. "It pleases me to inform you that we had made significant progress in finalizing the list of flagship cooperation projects in the Philippines for funding by Japan and identify several others for possible Japanese financing , in step with the intensified public investment program of Rodrigo Duterte’s presidency,” said Dominguez National Economic and Development Authority Director General Ernesto Pernia said nine projects are up for Japanese funding, including Harnessing Agribusiness through Robust and Vibrant Entrepreneurship Supportive of Peaceful Transformation (HARVEST) estimated at P2 billion, Malitubog-Maridagao Irrigation Project Phase II and the Mega Manila Project, Phase 1 worth P214 billion. The Malolos Clark Railway Project costing P95.368 billion, Cavite Industrial Area Flood Management Project worth P9.891 billion, and Dalton Pass East Alignment Alternative Road Project estimated at P4.010 billion are included in the list, Pernia said. He said the Road Network Development Project in Conflict-Affected Areas in Mindanao estimated at P10 billion, Circumferential Road 3 Missing Link Project at P10.5 billion and the Pasig-River Marikina Channel Improvement Project (Phase 1V) at P26 billion were included. The Philippine panel is led by Dominguez and Pernia while the Japanese side is headed by Dr. Hiroto Izumi, a special advisor of Japan Prime Minister Shinzo Abe. Dominguez said they have discussed "plans and actions to be undertaken in a mutually agreed schedule that will ensure swift implementation of big ticket projects. These are the projects under "Build Build Build" which are major railway projects, flood management , and roads. He said part of Japan's role is to participate in the preparation, feasibility study and concept preparations. When the project has been evaluated and approved Japan will most likely finance it with multilateral agencies like Asian Development Bank, Dominguez said. "In the first meeting, we discussed what are the policies going to be. Now we are focusing more on the concrete projects as well as having the Japanese side how we are speeding up our side...The implementing agencies also described the progress they are making the different projects we had already discussed", Dominguez said. The next meeting will be about the "actual issues on the implementation" as the projects and discussion progress. There are new projects being discussed like the Department of Information and Communications Technology  project regarding energy plants where the Japanese technology will be used, he said. Alanna Ambi/DMS