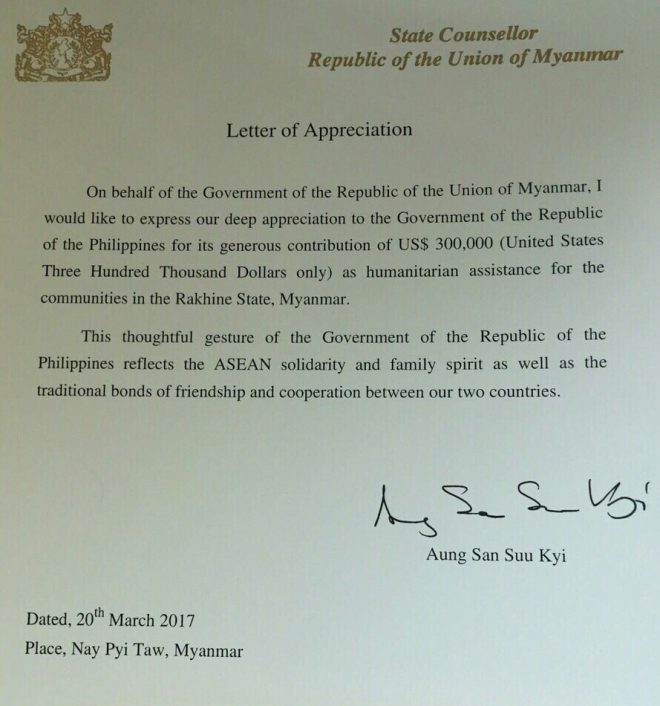 The Philippines pledged $300,000 as humanitarian assistance for a crisis involving the Rohingya in Myanmar’s Rakhine region, a statement from Malacanang said Monday. President Rodrigo Duterte met with State Counsellor Daw Aung San Suu Kyi at the Call Room of the Presidential Palace where he handed over the pledge and gave her a bouquet of roses. Suu Kyi, a winner of the Nobel Peace Prize, thanked Duterte and the Filipino people for the assistance. The Philippines and Myanmar also signed a deal on Monday on food security and agricultural cooperation. In the bilateral meeting, Duterte and Myanmar President U Htin Kyaw affirmed the strong relations of the two countries. After the meeting, the two leaders witnessed the signing of the Memorandum of Understanding on Food Security and Agricultural Cooperation by the Philippines' Department of Agriculture and Myanmar’s Ministry of Agriculture, Livestock and Irrigation. When super typhoon Yolanda hit the Philippines in 2013, Myanmar was also the first to help the Philippines as former president  U Thein Sein was also the first to visit Bantayan island, one of the typhoon hardest hit areas in Cebu. The Department of Foreign Affairs said Duterte sought and received the support of the  Myanmar President and State Counsellor for the Philippines' chairmanship of ASEAN this year. In discussions, he also called for increased two way trade and investment, citing the growing presence of Philippine companies in Myanmar, it said. Duterte also met with Myanmar's  Commander-in-Chief, Senior General Min Aung Hlaing at the Horizon Lake View Hotel. After Myanmar, Duterte proceeded Monday night to Thailand for an official visit also before returning to the Philippines early Thursday. The Philippines and Myanmar celebrated last year 60 years of bilateral relations. (Celerina Monte/DMS)