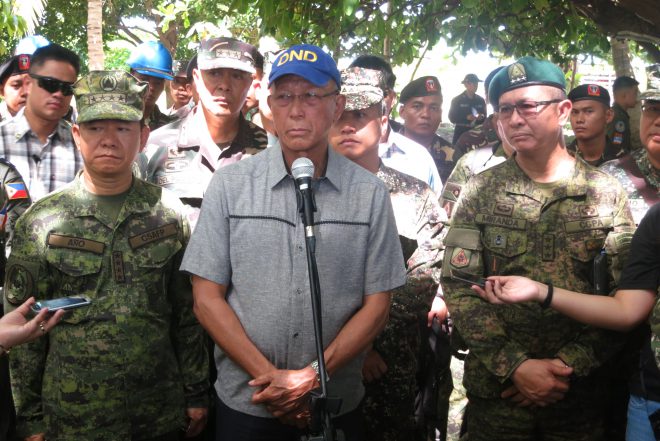 Pagasa Island, Palawan -- The Philippine government is set to spend a total of 1.6 billion pesos for the construction and improvement of facilities in Pagasa Island in the West Philippines Sea. “All in all, including the runway, everything is about more than one billion pesos, 1.2, then plus 400 million in transportation, 1.6 all in all. That is only for Pagasa,” Defense Secretary Delfin Lorenzana told reporters here Friday. While talking before soldiers and people in the community of Pagasa Island, Lorenzana explained he went to visit the area as President Rodrigo Duterte ordered the improvement of the facilities in the island. “The reason why we are here is to check the area because the president wants to develop the area, we have allotted funds for the improvement of our runway,” he said. Lorenzana said aside from improving the 1.3 km runway in the Island, he enumerated other facilities that will be built and improved in the area like the fish port, tower, power plant,  electricity, solar panels, desalination, building, military facilities, sewerage system and others. “We have seen the beautiful beaches, very white and shallow and we will develop his into a tourism area and marine research (facility),” he said. During his talk, Lorenzana emphasized the need to improve the Philippine flag in the area. "Our flagpole, we will make much longer and with a much bigger flag for the others to see that we have a big flag here," he said. Lorenzana said based on their plan all construction in the island will be done by the military Engineering Battalions that includes Naval Construction Brigade (Sea Bees) and Air Force Engineering Battalion. He said the first facility that will be built is the beaching ramp to allow the naval landing ship to transport construction materials used for improvement in the island. “The Philippine Navy already have plans to improve the beaching to allow the landing of our landing ship tank (LST) that would bring construction material because those that will be used here are cement, gravel. Everything that will be used here that would come from Palawan or Manila,” Lorenzana said. “We will prioritized the beaching ramp because without that we will not be able to deliver building materials here. LST will not be able to dock here,” he said. The beaching ramp should be constructed before the rainy season,” he added. (Robina Asido/DMS)