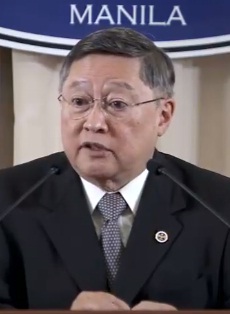 The Philippine government has no plan to pitch in additional projects for possible Japanese funding during their second infrastructure meeting this week in Manila. In a press briefing in Malacanang on Thursday, Finance Secretary Carlos Dominguez III said the government would focus on the list of projects that were initially submitted to Japan, such as the rail and subway projects. "We want to finish the ones that are in the pipeline already first so that we don’t get distracted," he said. The Philippines and Japan are set to hold on Friday their second Joint Committee on Infrastructure Development and Economic Cooperation Meeting  in Manila. Dominguez said they will meet with their Japanese counterparts to discuss the Philippines' Build, Build, Build Program. "Now, the meeting will be here in Manila. So, we will just review the projects that they have offered to fund. And those projects, I don’t have all the complete list. I will have them tomorrow," he said. The major projects that Japan offered to fund are the 127-kilometer Manila to Clark Commuter Railway System that will also extend down to Los Baños or Calamba, Laguna and the subway project, which will run from the Ninoy Aquino International Airport in Pasay City through Food Terminal Inc. in Taguig City and all the way up to the North Triangle in Quezon City, Dominguez said. "So those are the two large projects that they are funding and its status will be deliberated upon these next few days," he said. During their first meeting in Japan in March, the Philippines has lined up 14 projects for Tokyo's possible funding. While the projects to be funded by Japan would be through loans, Dominguez said they were like grants because of low interest rates. "They are almost aid because the actual terms are very, very liberal. The interest rates are extremely low so you can almost say they are, you know, semi-grants," he said. (Celerina Monte/DMS)