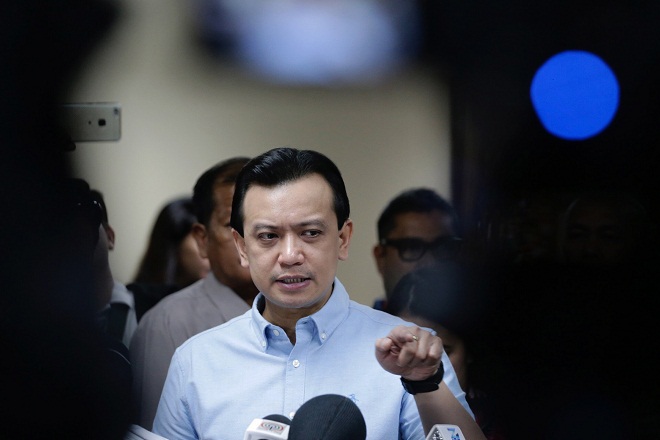 Police to serve arrest warrant vs Trillanes, others allegedly tagged for sedition

The Philippine National Police ( PNP) said Friday they will serve the warrant of arrest against former Senator Antonio Trillanes IV and other respondents charged of conspiracy to commit sedition.


“On orders of the Metropolitan Trial Court Branch 138 of Quezon City, the PNP is duty bound to effect the arrest of all persons named in the Warrant of Arrest and ensure their security while under our custody,” said Police Brigadier General Bernard Banac, PNP spokesperson, in a statement.


Banac said they will verify if all personalities involved in the court order are outside the country.


“If and when verified that anyone is on travel and out of the country, then PNP will wait for the return and arrival of subject person,” he said.


Trillanes is said to be out of the country. Advincula is in a safehouse.


The Quezon City court set the arraignment of the accused on March 17.


The case against Trillanes and others arose from the testimony of Advincula, who confessed that he was alias Bikoy, the hooded narrator in the “Ang Totoong Narcolist” videos, and opposition leaders plotted to discredit President Rodrigo Duterte and his allies by linking his family to the illegal drug trade. Ella Dionisio/DMS