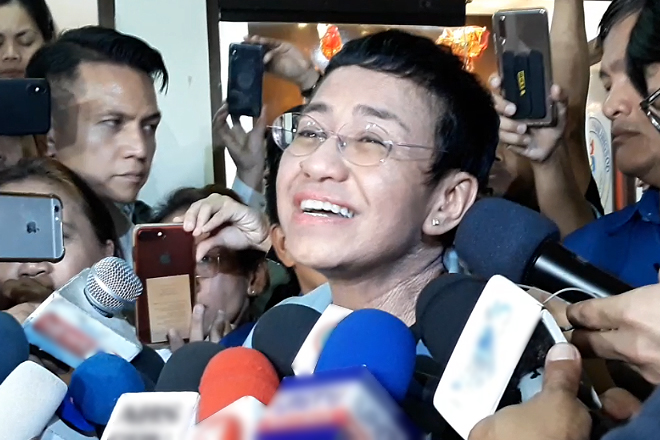 Ressa was arrested by the authorities of National Bureau of Investigation (NBI) on Wednesday afternoon for a cyberlibel case filed by businessman Wilfredo Keng against her.

Her arraignment is set at 8:30 am on March 1 but her camp will seek to quash the charges against her.

Ressa, a former CNN correspondent in Indonesia and cited by Time Magazine in 2018 as one of the guardians on press freedom,  said this is the sixth time she posted bail and this is the highest amount so far.

''It is my first time to be arrested,” she said in an ambush interview after posting bail.

During an interview with reporters at NBI earlier, Ressa said she posted more bail than criminals and even from Ilocos Norte Rep. Imelda Marcos.

In a release order signed by Manila RTC Branch 46 Presiding Judge Maria Teresa Abadilla, Ressa was allowed to go home after being detained inside the NBI-Cybercrime Section conference room for almost 12 hours.

Ressa said she was able to sleep while seating in the chairs inside the NBI office.

She called her arrest ''an act of abuse of power and weaponization of the law''.

"My stay last night at the NBI really made me think about what this is all about, and for me it’s about two things: abuse of power and weaponization of the law. This isn’t just about me, not just about Rappler,” Ressa told reporters.

“The message that the government is sending is very clear,” she said, claiming that someone from the NBI told their reporters to be silent or they are going to be next.

Ressa claimed her arrest  “politically motivated” as the NBI had junked this cyberlibel case against her but this resurfaced a week later.

“I don’t know why the government is afraid of the truth,” said Ressa.

The Department of Justice found probable cause in the complaint filed by the National Bureau of Investigation and Keng for violation of the Cybercrime Prevention Act in March 2018.

The article, published in May 2012, written by Santos cited an “intelligence report,” saying Keng had been under surveillance for alleged involvement in human trafficking and drug smuggling.

The DOJ rejected defense of the respondents they could not be held liable under RA 10175, which was signed in September 2012 or four months after the article was posted on Rappler.

But the DOJ said the updated version of the article, which was posted by Rappler on Feb. 19, 2014, was covered by the law.

“You shouldn’t be afraid of that, in fact that should make the government stronger. That is the check and balance of journalism and government. We’ve done this to many administration. I have been before and I’ll be here after,” Ressa said.

Ressa said press freedom is the foundation of every single right of every Filipino to the truth.

"I’m saying and I’m appealing to you not to be silent even if, and especially if you are next. You have to express outrage like I’m doing now. Press freedom is not just about journalist,” she said.

“So that we can hold the powerful to account. What we are seeing is death by a thousand cut of our democracy and I appeal to you to join me,” she added.

Her camp will study the NBI's process of arresting her after agents went to Rappler's office almost 5 pm making it impossible for her to post bail as courts are closed.

Rappler claimed the Pasay City night court did not allow her to post bail.

Ressa called the experiences she had “funny” as she underwent through a different process.

She added the arrest warrant is “imperfect” as it didn’t have the information for bail.

"You know it’s funny, we should know what the law and what the process is, are but there are very small and big differences in the processes that I’ve gone through and I’ve seen all our lawyers go through all of it,” she said.

Ressa said they will continue to fight in court and appeal to men and women in the government, especially to those from the judiciary, police, and NBI.

“You are men and women, individuals with your own values. If you are to do something wrong, don’t do it. You know the spirit of the law, don’t be manipulated to violate the spirit of the constitution,” said Ressa.

She said she will be transparent in the process she will take as she did nothing wrong.

Ressa warned Justice Secretary Menardo Guevarra that if they can charge her, she can also make him accountable as a citizen of the Philippines.

“But you don’t wanna be known as the secretary of injustice. I have also right to hold you accountable. I’m the citizen of this country and you cannot violate my rights,” she said.

According to her lawyer, JJ Disini, the case was filed by the DOJ last February 6 and the judge signed the arrest warrant on February 12.

Asked about the statement of Guevarra that they could have prevented her arrest if they really wanted to, Disini said accused or even the counsel of the accused were not notified if the DOJ files information in the court.

“When DOJ files the information in court, there is no notice to the accuse, no notice to the council of accused so we will not have any opportunity to address, take action against the arrest warrant being issued,” he said.

Disini said the night court judge is not in the position to grant her bail as they do not have jurisdiction over her case in the regional trial court.

“The rules of court does allow municipal trial courts to allow the accused to post bail but it was not the position taken by the judges,” he said.

But he said there could be also complications since there is no information on the warrant of arrest on how much is her bail.

Ressa said last night that she will not be intimidated by the actions of the government and will continue to work her job in revealing the truth as a journalist. Ella Dionisio/DMS