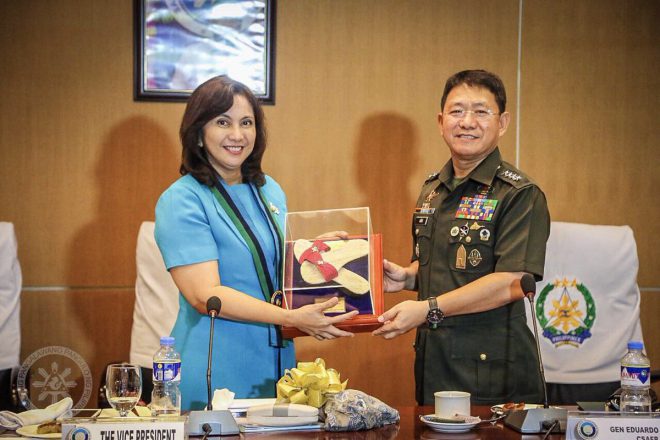 Robredo gets security briefing from AFP

Vice President Leni Robredo visits the headquarters of the Armed Forces of the Philippines (AFP) for a security briefing on Tuesday. “The AFP rendered customary arrival honors to Vice President Robredo befitting the second highest official of the land,” Col. Edgard Arevalo, AFP public affairs chief, said Tuesday. Arevalo said  Robredo was invited by Defense Secretary Delfin Lorenzana to visit Camp Aguinaldo. “This engagement has been arranged by the Department of National Defense (DND) and the Office of the Vice President (OVP) although no definite date had been established until last week,” he said. Arevalo said the security briefing was provided by Major General Melquiades Feliciano, the AFP deputy chief of staff for operation. “The Vice President was made aware of the capabilities the AFP now possesses, the security challenges it faces and copes in various mission areas locally and abroad, and the AFP's way forward in its firm and continuing commitment to bring about conditions for peace, progress, and security for the country with the support of other Departments, local governments, and their respective constituents,” he added. Arevalo said it is normal that a vice president will be given a briefing about the current security situation. "It’s a normal or routine activity that we accord to a visiting national leader," he said. "We can grant this (security briefing) to congressman or senator. It is also okay with the vice president. She is a government official. She is actually the second highest official of the land so she is also entitled (to know) the mission and function of the AFP, our current capabilities etc...," he added. Arevalo said in his remarks, Lorenzana welcomed the vice president for the honor of her visit. He said the secretary likewise expressed the continuing and unwavering loyalty and commitment of the DND and the AFP to the Constitution and the duly constituted authorities. “And that every member of the Department, the Soldiers, Airmen, Sailors and Marines will have no reservations to perpetuate its mandate of ensuring the defense and security of the state and the protection of its sovereignty and territorial integrity,” he added. Arevalo said Robredo also expressed her gratitude for the honors and briefing given to her. “She expressed satisfaction over the many AFP accomplishments and gave her support to the uniformed personnel and civilian employees of the AFP in the pursuit of its mission,” he said. “The vice president wished the AFP success in all its endeavor,” he added. Robina Asido/DMS