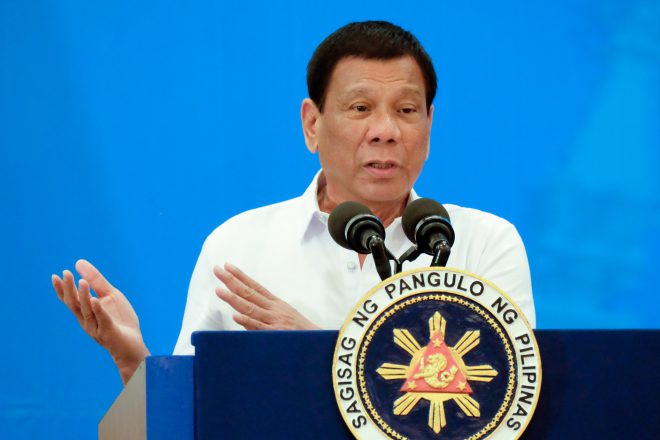 Robredo “in a hurry to be the president”: Duterte

President Rodrigo Duterte said Vice President Leni Robredo is in a hurry to be a president. He made the statement during his speech before the Filipino community in Myanmar on Sunday night where he was on an overnight official trip. "My opponents, they want me (out). Leni is in a hurry to become the president," Duterte said. Magdalo Partylist Rep. Gary Alejano filed last week the first impeachment complaint against Duterte. The filing of the impeachment complaint came as Robredo made a video message for the United Nations, criticizing the bloody war on drugs by the Duterte administration. Alejano's complaint was based on the alleged extrajudicial killings of individuals allegedly involved in illegal drugs. Alejano is an ally of Senator Antonio Trillanes, also a staunch critic of Duterte. The party-list lawmaker has said he was planning to file a supplemental impeachment complaint against Duterte in relation to the latter's stance on Benham Rise located at the United Nations-declared extended continental shelf of the Philippines at eastern part of the country. Duterte has said the Chinese presence in the area could not be construed as incursion and he has agreement with Beijing. This was, however, contrary to the statements of Defense Secretary Delfin Lorenzana and Foreign Affairs Acting Secretary Enrique Manalo. Both   claimed they did not know the supposed agreement. Duterte slammed Trillanes and Alejano, whom he branded as"cowards" after leading failed coup d'etat during the administration of then President Gloria Macapagal-Arroyo. He said both Trillanes and Alejano only disturbed public peace when they occupied a hotel in Makati City in 2007. "That is the only one that you are capable of doing, to invade the hotel and thereafter to surrender...what have you done to the country? Nothing. Except to make noise and that really happened during your mutiny," Duterte said when asked on Alejano's plan to file a supplemental impeachment against him because of his position on Benham Rise. He said if Alejano wants to fight China, he would be glad to send the former mutineer as the first batch of delegation of Filipinos who would want to take the Spratly Islands and all those occupied now by China. Duterte said if he would declare war against China, it would be a slaughter for the Filipinos and he could not do that. "Do not compare me with you. You are all cowards," he said. The mutineers were imprisoned and were released after former President Benigno Aquino III granted them amnesty when he assumed office. "You were forgiven by a president that I don't know. And you enjoyed your freedom now because of one man but what you did to the country was something out of...now you are boastful. What are you boasting of? That you had your chance to show your bravery. Do not shit with me," Duterte said. "If I were you, stop boasting about bravery and all of these things. You are incapable of doing it. You’ve had your chance to show to the Filipino. Your bravery was tested and you failed miserably. So do not talk about bravery and all of these things. You are actually a shame," he said, adding that the government spent for their studies when they entered to and graduated from the Philippine Military Academy in Baguio City. (Celerina Monte/DMS)