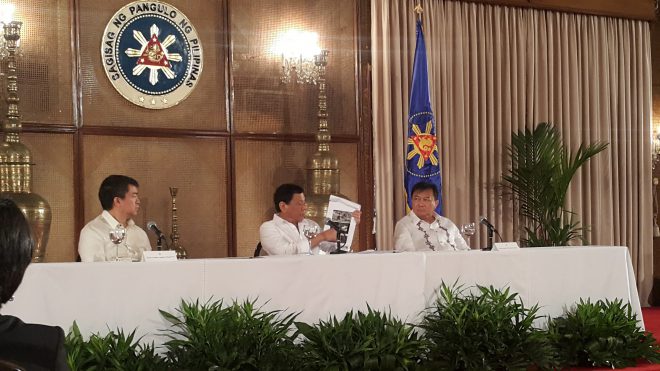 Say Benham Rise is ours but “in a nice way”: Duterte

President Rodrigo Duterte said the Philippines will assert its sovereignty over Benham Rise by ordering the Navy to go there and tell China, if they meet them there, that “it is ours”, but in a nice way. Duterte told reporters in Malacanang in a press conference Monday that he will bring up the ruling of the abitral tribunal with China at the right time. “Let us not fight about ownership or sovereignty at this time,” said Duterte. The Armed Forces of the Philippines (AFP) will increase its patrols in Benham Rise and perhaps “put something there that says this is ours” over a Chinese survey ship was monitored there last year. “Well, we will do something there. Maybe we will increase our patrols at the same time maybe we will also put something there (Benham Rise), structure that says this is ours,” l Defense Secretary Delfin Lorenzana told reporters in Baguio City last Sunday. “He (President Rodrigo Duterte) said let us increase our patrol and to also declare that to show to other people that we have jurisdiction over those areas,” Lorenzana added. Lorenzana admitted the government is worried. . “Yes, we are actually worried because when we see it last year, their survey is criss-crossing that is why it alarms us,” Lorenzana said. Lorenzana confirmed the China has reacted on the Philippines concern over their presence in Benham Rise but he noted the Chinese claim it is just innocent passage. He noted the Philippines will accept China’s explanation but noted the Philippines will be guarding the area if the Chinese ships will return. “We will leave it at that. We will trust what they say but at the same time we will keep on patrolling our area and find out if they will still return there because as far as we are concerned they have business going there,” he said. Lorenzana said if the ship is just on “innocent passage, it should just be from point A to point B. It should be on a straight path and with constant steaming speed”… “Based on what we saw their survey ship is very slow and it stops in one area. It stays there for several days, then (it) transfers again to another area so that is not innocent passage but we will accept the explanation of the Chinese that they have nothing, they have no desire on the Benham Rise,” he added. (Robina Asido/Celerina Monte/ DMS)