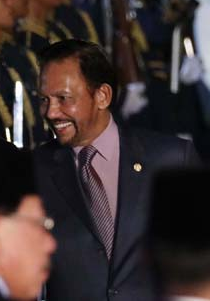 Sultan Hassanal Bolkiah of Brunei arrived Wednesday night in Manila for a state visit and attend the 30th Association of Southeast Asian Nations on April 29. On board on a Boeing 747-800 plane, Bolkiah arrived at around 7pm at the Ninoy Aquino International Airport. Finance Secretary Carlos Dominquez III and Philippine Ambassador to Brunei Meynardo Montealegre were among those who welcomed Bolkiah. President Rodrigo Duterte will welcome Bolkiah and members of his delegation in Malacanang on Thursday. "The two leaders are expected to exchange views on pressing bilateral and regional issues of concern, including matters with respect to peace and security, trade and investments, and ASEAN," Presidential Spokesperson Ernesto Abella said in a statement. The Philippines and Brunei are two of the four ASEAN members, which have claims in the South China Sea. Bolkiah's state visit in the Philippines comes following Duterte's state visit to Brunei in October last year. (Celerina Monte/DMS)