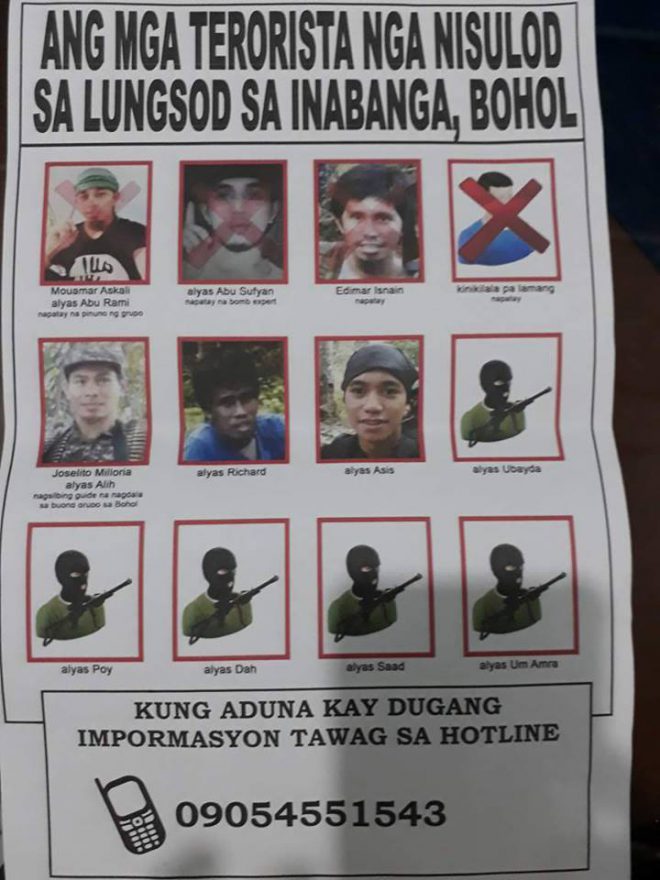 The combined forces of the Armed Forces of the Philippines and Philippine National Police killed another three members of Abu Sayyaf Group in a series of skirmishes in Bohol Saturday evening. This came after the AFP Central Command said on Saturday Joselito Melloria also known as Abu Alih who guided the terrorist to Inabanga was killed in an encounter in  Brgy. Bacani, Clarin. Melloria, a native of Inabanga, became a Muslim convert. AFP Central Command said in a statement Melloria's death left the group with no leader and direction. Hours after Melloria's death, at around 8 pm, three unidentified members of the terrorist group were neutralized. Their identities were being established. Recovered from the site were high-powered firearms, grenade launcher and rounds of ammunition. Col. Edgard Arevalo, AFP public affairs chief, said authorities continue to hunt the remaining terrorist who were part of an 11-man group who attempted to establish a foothold in Bohol. "The hunt continues for the remaining two or three terrorists who were part of the band that attempted to establish foothold in Bohol but failed. We have reports indicating that they were also wounded and running out of supplies,” Arevalo said. Liutenant General Oscar Lactao, commander of AFP's Central Commandsaid terrorism has no place in the Visayas. He said it will be a matter of time before they can say the threat is totally eliminated. "We salute our patriotic citizens and the dedicated local government leaders who have been very vigilant and actively engaged in providing information and giving their full support and cooperation to the security forces to effectively thwart the evil designs of these terrorists," Lactao said in a statement. AFP Chief of Staff General Eduardo Ano issued a warning to terrorist. "The AFP has sent a very strong message: do not attempt to propagate your nefarious activities. "You will suffer the same fatal consequences as these terrorists for attempting to bring in terror and havoc to this tranquil province of Bohol-- or in other places in the country for that matter." (Ella Dionisio/DMS)