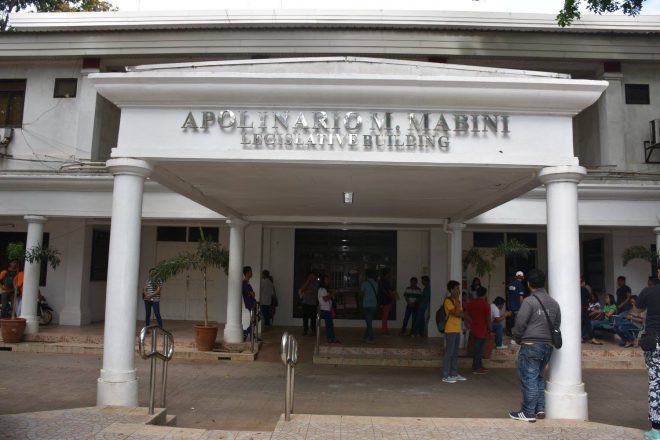 Batangas Governor Hermilando Mandanas declared on Wednesday a state of calamity in the entire province following the damage caused by a magnitude 5.5 earthquake Tuesday night. In a text message to Daily Manila Shimbun, Mandanas said he placed Batangas under the state of calamity in order to tap "more available resources for contingencies that may be immediately needed." "As governor, I declared state of calamity this a.m.," Mandanas said, adding that so far no injuries were reported. Mandanas said the cost of damage to infrastructure is being validated, but "(repair of) provincial facilities may need at least P20 million." Work and classes were suspended on Wednesday as aftershocks continued to be felt in Batangas and nearby areas. In a television interview, Mandanas said the local government had suspended classes to  evaluate the affected facilities. He said there are facilities, including the Taal Basilica, the biggest in Asia, that sustained minor damage. “As you probably already know some churches have been damaged even the biggest basilica in the whole of Asia, the one that which we have in Taal also sustained damage and of course minor damages even in Tingloy which was close to the epicentre of… this tragic earthquake,” Mandanas said. “Fortunately… the damage is very small, but nevertheless we are going to be cautious and declare no classed and just be able to investigate the damage and all that,” he added. On Wednesday, the regional Office of Civil Defense (OCD) said their disaster risk reduction and management council has raised its alert status to red to ensure proper monitoring, coordination and response to affected areas. The OCD also recorded minor damage in some business establishment such as 7/11, Mang Inasal, Puregold and University of Batangas, all in Batangas City. The report also noted intermittent power interruption in San Pascual, Batangas was experienced during the earthquake and few moments after that. Around 3000 individuals from coastal areas of Taal, Lemery and Mabini, Batangas  evacuated, fearing a possible tsunami. “These individuals have begun returning to their homes as of 4 am,” the report said. Malacanang urged people in Batangas to remain vigilant. "We ask our people, especially residents of the province of Batangas, to remain vigilant and alert in light of last night’s earthquake," Presidential Spokesperson Ernesto Abella said in a statement. "Let us refrain from forwarding news from unverified sources that may cause undue alarm and panic," he added. Celerina Monte, Robina Asido/DMS