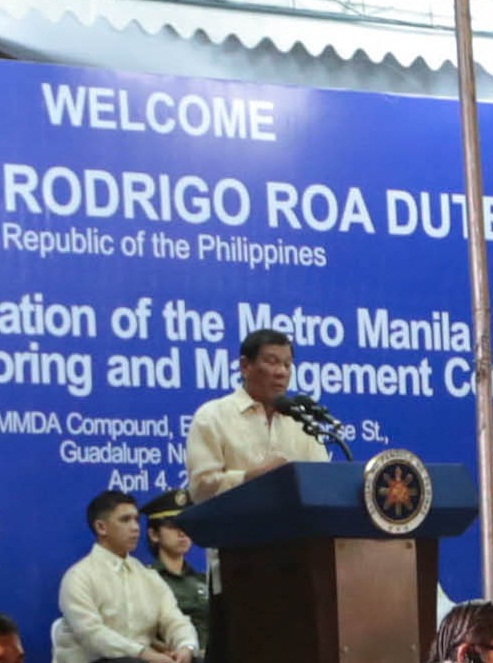 President Rodrigo Duterte said on Tuesday that he personally told Ismael Sueno that he was "fired" as secretary of the Department of Interior and Local Government because he was "lying through his teeth." In a speech at the Metropolitan Manila Development Authority headquarters in Makati,  Duterte said he even berated Sueno during the Cabinet meeting Monday night. "I was trying really to avoid an embarrassing situation but after reading the legal opinion of my office vis-a-vis with the stand of a Cabinet member he said that he was not informed of the legal opinion of his own office,” said Duterte. “I lost my...if you answer me with that kind of statement that you never read the legal opinion of the legal officers of your own office, it's either you're taking me for a stupid and idiot (reasoning) or you are lying with your teeth," he said. "That's why I said, son of a bitch. So I said, 'you're fired'. I just simply said you're fired," he added. Duterte said he is serious about his campaign promise to stop corruption. Sueno allegedly was engaged in irregularities during his stint at the DILG, which he  denied. In a statement on Tuesday, he said he is ready to face any investigation. In an ambush interview at the Philippine Army where he attended the 120th founding anniversary, Duterte said his decision to fire Sueno was in relation to the grant of fire trucks during the previous administration to DILG. "You know… the moment they say that it is a grant to Republic of the Philippines, that belongs to the people of the Republic. At that moment, it cannot be used for international commitment. You have to go to bidding and all of these things because it’s already the money of the government," he said. He wondered why Sueno had to go abroad just to sign papers for the fire trucks. Sueno, in a press statement, admitted he went to Austria to inspect the fire trucks to ensure they were in good condition before being delivered here. "If we did not do that, we cannot anymore complain if they delivered defective firetrucks to us,” Sueno said. Duterte said he is still looking for Sueno's replacement. Asked if former Senator and defeated vice presidential candidate Ferdinand Marcos Jr. would head the department, Duterte said he does not know. If he would appoint Marcos to the Cabinet, "he would have abandoned his appeal (election protest)." (Celerina Monte/DMS)