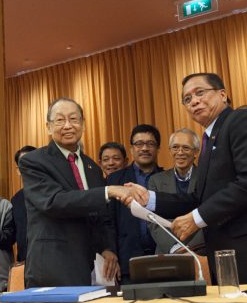 The Philippine government and the communist National Democratic Front signed on Wednesday an agreement on an interim joint ceasefire, which "will take effect only as soon as the guidelines and ground rules are approved." Members of the government peace panel led by Labor Secretary Silvestre Bello III and members of the NDF peace panel headed by Fidel Agcaoili inked the deal during the ongoing fourth round of peace talks in the Netherlands. In a statement released in Noordwijk, it said the guidelines for the interim truce will cover such areas as the presence of armed groups in local communities, creation of buffer zones; prohibited, hostile and provocative acts including collection of revolutionary taxes; and undertaking of joint socio-economic projects. Both parties would also work for the formation of a Joint Ceasefire Committee and the prospective role of a third party ceasefire monitoring and other ceasefire mechanisms in the implementation of the ceasefire, including the handling of complaints and alleged violations. "Matters regarding a single government authority and taxation shall be discussed and resolved in forging the Comprehensive Agreement on Political and Constitutional Reforms within the framework of the proposed Federal Republic of the Philippines," the agreement said. President Rodrigo Duterte has included in his conditions in talking with the leftist rebels to stop extortion or what the Maoist group calls as "revolutionary taxes." The deal also provides that the Joint Ceasefire Agreement shall "be deemed interim until a permanent ceasefire agreement is forged pursuant to a Comprehensive Agreement on End of Hostilities and Disposition of Forces." Prior to the signing of the interim ceasefire agreement, Duterte, in a speech in Pampanga during the gathering of prosecutors, said he talked over the phone with peace adviser Jesus Dureza and Bello regarding the ongoing peace talks in the Netherlands. He did not mention anything about a truce. Instead, Duterte said he told the two officials to tell founding chairman of the Communist Party of the Philippines Jose Maria Sison, who is "very sick," to come home. He assured that the government would not arrest Sison if he decides to return to the Philippines from his decades of exile in the Netherlands. "Just before I came down here, I just had a talk with Dureza and Bello, who called me up...I said, 'you know tell Sison, because he is sick, he's very sick, he can come home," he said. "I'll give him freedom of movement. I will not arrest him. I'll even pay for his facilitation if he wants," he added. But Duterte reiterated his conditions with the NDF, the political wing of the CPP-New People's Army, in the peace talks. He said the NPA should stop collecting revolutionary taxes, release all its prisoners, and not to claim any Philippine territory. The president said the rebels promised to release all the political prisoners in the next two days. Both parties also moved fast to conclude provisions on a draft Comprehensive Agreement on Social and Economic Reforms meant to address the root causes of the armed conflict, which has been on its 48 years already. (Celerina Monte/DMS)