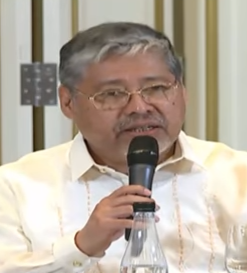 The Philippines has formally asked China to clarify reported plan that it will construct structures in the Scarborough Shoal, the Department of Foreign Affairs (DFA) said on Wednesday. In a televised press conference from Thailand, Acting Foreign Affairs Secretary Enrique Manalo could not say if Manila is preparing a "strong" protest against Beijing. "The other day, the Department of Foreign Affairs already issued, requested China for clarification on this reported plan. But let me also say in the meantime the Philippines is maintaining a close watch," Manalo said. Asked if the DFA has any plan of filing a strong protest as what Justice Secretary Vitaliano Aguirre II said Tuesday, Manalo replied," We already approached China to seek clarification on this reported plan. We have to wait for reply." There were reports Sansha City, which China created to strengthen its claim over the entire South China Sea, was planning to build an environmental monitoring station on Scarborough Shoal, locally known as Panatag or Bajo de Masinloc. It is within the 200 nautical miles exclusive economic zone of the Philippines. Manalo said the Philippines, as well as the nine other member countries of the Association of Southeast Asian Nations, and China are set to hold senior officials' meeting on the Declaration of Code of Conduct in the South China Sea to discuss the framework, which will be the basis for the COC. He said it is the hope of everyone that they could come out of "at least a preliminary agreement" of the framework. President Rodrigo Duterte, in a joint statement with Thailand Prime Minister Prayut Chan-o-cha in Bangkok on Tuesday night, stressed the need to complete the framework of the COC in the South China Sea within the year. Senator Alan Peter Cayetano, chair of the Senate committee on foreign relations and was part of the Philippine delegation to Bangkok, assured that Duterte would "not give up a single square centimeter of the Philippine territory" to China. He made the assurance amid Duterte's softer stance against China's activities in the disputed waters. Earlier, Duterte said he could not stop Beijing if it would construct structures in the Philippine-claimed Scarborough Shoal due to China's military power. He did not even call China's attention and apparently sided with Beijing when asked in the previous press conference about the presence of the Chinese ships in Benham Rise, east of Luzon. Cayetano said many of Duterte's statements are "misunderstood." "When he gives practical statements of what we can and what we cannot do, it doesn't mean he will not exert efforts for Filipino people," he said, stressing that Duterte has his own long term strategy of finally resolving the issues in the South China Sea. Supreme Court Associate Justice Antonio Carpio has urged Duterte to defend its claim over the South China Sea by filing a strong protest against Beijing's construction activities in the area. (Celerina Monte/DMS)