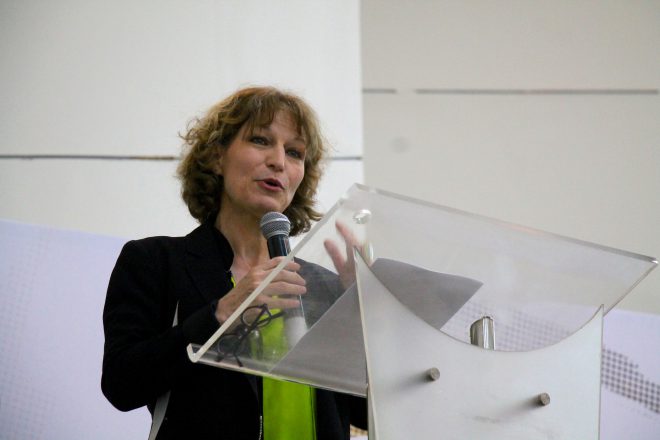 The "war on drugs" does not work, said visiting United Nations Special Rapporteur on extra-judicial summary or arbitrary executions Agnes Callamard on Friday.
Malacanang hit Callamard for her visit in the country without contacting the government in advance, saying this has sent a "clear signal that she is not interested in getting an objective perspective" on the Duterte administration's campaign against illegal drugs.
But the UN rapporteur was quick in saying that her trip to Manila was not an official visit as she is just participating in the two-day forum on drug issues at the state-run University of the Philippines.
Callamard, in her keynote address in the policy forum on "Drug Issues, Different Perspectives," recalled that in April 2016, the general assembly of the world's government "recognised explicitly that the 'war on drugs' – be it community based, national or global – does not work.
"And further, that many harms associated with drugs are not caused by drugs, but by the negative impacts of badly thought out drug policies," she said.
"The joint commitment to effectively addressing and countering the world drug problem is a call for action, but not to any action: according to the world’s leaders there are other ways, better ways; evidence-based, scientific ways, of combating drug abuse and trafficking – ways that do not make matters worse," she added.
Since last year, Callamard has already raised concern over the increasing number of drug suspects being killed in the Philippines due to President Rodrigo Duterte's war on drugs.
The Duterte administration invited Callamard to visit the Philippines and investigate the alleged extrajudicial killings of individuals allegedly involved in illicit drugs. But Duterte  set several conditions, such as allowing him to publicly  question Callamard. The UN rapporteur did not agree to Duterte's conditions, saying she was bound to conduct the UN's standardized assessment.
Presidential Spokesperson Ernesto Abella, in a statement, said that the government is aware that Callamard is currently in the Philippines.
"We are disappointed that, in not contacting our government in advance of this visit, she has sent a clear signal that she is not interested in getting an objective perspective on the issues that are the focus of her responsibility," he said.
He also said the fact that Callamard did not respond to the government's invitation last year showed that she would not be approaching her review of allegations concerning the country objectively or comprehensively.
"That assessment has been reinforced by the fact that Dr. Callamard has arrived in the Philippines in a manner that circumvents all recognized United Nations protocols for such visits and, more importantly, at the very time our government has a senior-level delegation traveling to Geneva to meet with officials of the Office of the United Nations High Commission for Human Rights as part of the 3rd Cycle of the Universal Period Review of the Philippines and the issue of human rights," he explained.
"Our position is very clear, if Dr. Callamard is committed to ensuring due process to our government and a truly objective assessment of our record on an issue of  tremendous importance to our nation, she should be in Geneva meeting with our representatives."
But Callamard told reporters after delivering her speech in the forum that her trip to the Philippines was just for the policy forum, which was initiated by the FLAG Anti-Death Penalty Task Force and the UP Office of the Chancellor and the Institute of Human Rights-UP College of Law.
"I am here solely for the purpose of the conference and policy forum. I am not here on an official visit. I am here in response to an invitation to participate to an academic conference. I will be present for the full two days and listening with great attention. It’s an important conference, an important benchmark which I support," she explained.
Duterte, in a speech in Davao City on Thursday, mentioned that the UN rapporteur was in the country.
Callamard said the government could monitor her while she is in the Philippines as she stressed that she is not in the country to collect information about the drug killings.
Human rights advocates used the forum to grill Dangerous Drugs Board head Benjamin Reyes, who was one of the speakers, concerning Duterte's war on drugs.
Detained Senator Leila de Lima, through her staff, also handed a handwritten letter to Callamard.
De Lima, Duterte's strong critic, has been detained in Camp Crame after she was arrested for her alleged involvement in the proliferation of illegal drugs in the New Bilibid Prison in Muntinlupa City when she was still the Justice secretary during the previous administration. She has been denying the allegation.
Reyes, in the same forum, reiterated Duterte's statement during the country's recent hosting of the Association of Southeast Asian Nations that the "Philippines is still a country ruled by law."
He said the government does not condone extrajudicial killings.
He cited that from the 53,503 government drug operations since July last year, 2,692 died, contrary to reports that they already reached to over 7,000.
But he admitted that there were 5,691 "homicide cases," which are still under investigation.
John Collins, director of International Drug Policy Program of the London School of Economics, said the Philippines' war on drugs could fail based on the experience of other countries.
"Based on international evidence it is extraordinarily unlikely that this (war on drugs) is going to have positive long term impact," he said. (Alanna Marie Ambi, Celerina Monte/DMS)