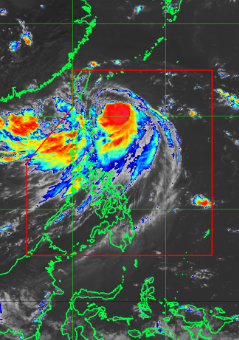 Severe tropical storm Gorio maintained its strength as it moves northwest, the Philippine Atmospheric, Geophysical and Astronomical Services Administration (Pagasa) said in their bulletin on Friday. Pag-asa said Gorio was last spotted at 360 km east of Basco, Batanes as of  10 am. Gorio has maximum sustained winds up to 105 kph and gustiness of 130 kph, Pagasa said. It is moving  northwest at15 kph. Moderate to heavy rainfall is expected in areas within 550 km of Gorio, it added. Luzon, including Metro Manila, will experience moderate to occasionally heavy rains as Gorio enhances the southwest monsoon. Light to moderate rains may be experienced over the rest of Luzon and Visayas, it added. In Baguio City,  the public works department said although Kennon Road remains open to motorists, it urges travellers to take Marcos Highway. (Alanna Ambi/DMS)