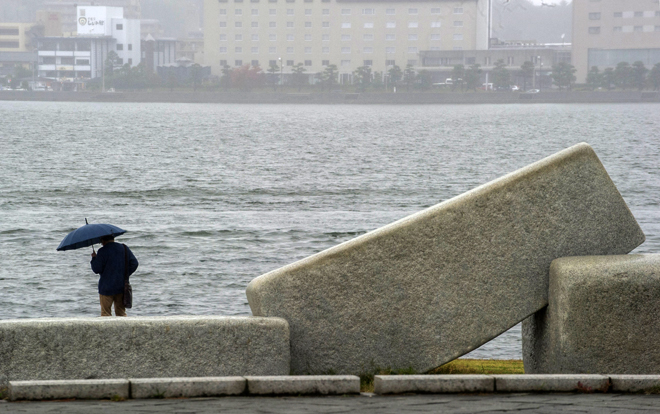 TOKYO- Typhoon Saola moved east-northeast over the Pacific Ocean off the western to central coast of Japan on Sunday, causing cancelations of air flights and train services.

The 22nd typhoon this season is expected to weaken into low pressure off the northeastern coast by early Monday morning after passing south of the Kanto eastern region, the Japan Meteorological Agency said.

The typhoon caused downpours in southwestern to western regions. The city of Toba, Mie Prefecture, had as much as 43.5 millimeters of rainfall per hour in the afternoon. There would be torrential rain and gusts in areas along the course of Saola, the agency warned.

According to Japan Airlines and All Nippon Airways, a total of 57 flights, mostly using airports in the Kyushu southwestern region, were canceled, affecting around 4,200 passengers.

Kyushu Railway Co. , or JR Kyushu, halted train operations from the first runs for the day on part of its Nippo and Nichinan Lines. East Japan Railway Co. , or JR East, refrained from running the Sunrise Izumo limited express sleeper and some other trains.

The peak gust speeds would be 45 meters per second on the Izu Islands, south of Tokyo, and 35 meters in many areas including Kanto, it noted. Jiji Press